DPVR is an up-and-coming virtual reality brand. Dominating the Asian VR market with their successful P1 and E3 lineup, they plan to conquer Europe with their affordable, high-quality VR headsets.

DPVR is developing several VR goggles, but in this product Review we will take a closer look at their three most popular models: DPVR P1, DPVR P1 4K Pro and DPVR E3 4K. The DPVR P1 series consists of Standalone VR headsets similar to the Oculus Go (now end-of-life), and the E3 4K series consists of an easy-to-use PC VR Headset with an exceptionally high image resolution.

The DPVR P1 and P1 4K Pro are well-built Standalone VR headsets with a very attractive appearance. The size and weight of the headset is reminiscent of the Oculus Go and the Pico G2 4K - but, especially the P1 4K Pro, stands out by placing a beautiful shiny plate on the front of the headset. This immediately gives the headset a much more luxurious and futuristic appearance, so that the glasses not only fit well together in terms of hardware, but also look very cool to wear!

When you first put the DPVR P1 on your head, you immediately feel that the headset feels light and comfortable. You can easily keep the glasses on for a longer period of time without experiencing red marks around the face and eyes. An additional advantage of the DPVR glasses is that they come standard with a silicone face mask, making the headset easy to wipe clean with a cleaning cloth. 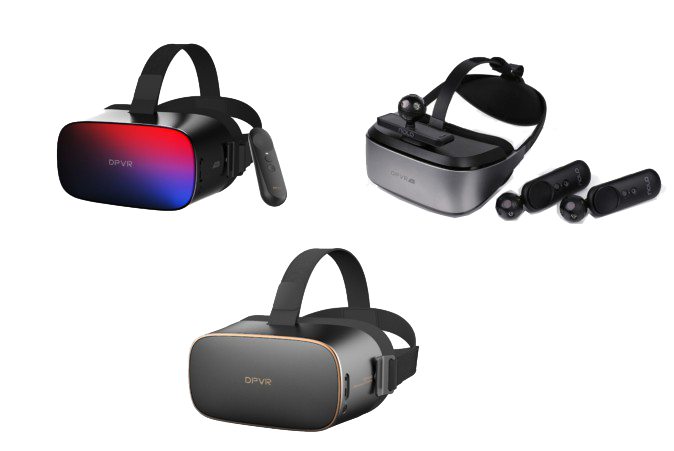 One of the problems that VR headsets from Asian countries face in their quest to conquer Europe is the software they use. In practice, this appears to be very focused on the Asian market (think, for example, of a start-up screen and the first applications in Chinese characters). If you have no knowledge of this language, this of course scares you off. DPVR solved this by equipping the headsets by default with the Viveport application. This allows you to use the (recognizable) applications that you can find on the Viveport platform with the DPVR P1 and P1 4K Pro without any problems!

The image quality of the DPVR P1 and P1 4K Pro is very good. The P1 is considered the basic version of the two Standalone DPVR headsets. The image resolution of 1280 x 1440 pixels per eye is fine for playing and viewing standard 360-degree videos. In addition, the headset is very easy to use with an external SD card, so you can also display content you have created yourself without any problems.

Are you looking for a somewhat higher image resolution? Then the DPVR P1 Pro is a better choice. These glasses have an image resolution of 1920 x 2160 pixels per eye and can therefore show images a lot sharper. The P1 Pro also has a stronger internal processor than the basic variant (Snapdragon XR1 vs. Mali-T760). The P1 Pro is therefore a good choice for users who want to play back images in a higher resolution, or who want to use the headset in combination with other VR games and applications.

The DPVR E3 4K can be called a special headset. You will generally not find both the shape and the use of it in the standard VR glasses that are now on the market. The E3 4K is also mainly used in Virtual Reality Arcades in countries such as Japan and Korea. The DPVR E3 4K is a PC-controlled 3 DOF VR Headset. This means that the VR glasses use the graphics power of the computer (and can therefore display games and applications very nicely) - but also that the headset is always connected to a cable. And the 3 DOF head tracking ensures that you can only look around you with the headset, and not physically walk through a (virtual) room.

In the Virtual Reality Arcades you will therefore see the DPVR E3 4K especially in the more extensive simulation games and devices. Think of the most futuristic-looking simulators, such as a tank, a rollercoaster or a cinema. With these simulators, the users do not physically walk through a room, but instead sit still in their place (while the simulator makes all movements). And it is precisely for this application that the DPVR E3 4K is extremely suitable!

Due to the good price/quality ratio (very high image resolution for a relatively low price), the DPVR E3 4K is therefore the number 1 choice for VR Arcades and other arcades in the field of commercial VR applications.

DPVR's products are available exclusively from Unbound VR. Questions about DPVR products? Then do not hesitate to contact us!